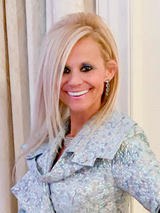 Randi Luxenberg was raised in Hillcrest, NY, the daughter of Evelyn and Bernard Beeber, z”l. From an early age, family, chesed and communal leadership were staples of Randi’s life. She attended Yeshiva of Central Queens (YCQ), Yeshiva University High School for Girls (Central), and, for her last year of high school, completed a joint program with Stern College and Machon Gold in Israel.   She graduated cum laude from Queens College with a major in computer science and a minor in mathematics, and later attended Baruch College taking MBA courses in finance and accounting.  While attending school, Randi worked as a research assistant for several professors on research projects relating to information technology. She ultimately began her career in IT in September, 1981.  Her first job was with Boeing Computer Services, then, American Management Systems, Chase Manhattan Bank, and, finally, a high level position at First Boston Corporation as Assistant Vice President for Information Technology.

In 1984, Randi married Arthur Luxenberg, who graduated from Cardozo Law School and now serves as a founding partner in the law firm of Weitz and Luxenberg.  The couple lived in Forest Hills for five years before moving to Great Neck.   Once in Great Neck, the Luxenbergs developed a strong relationship with Rabbi Yaacov and Abby Lerner and became active members of the Young Israel of Great Neck where they were major donors to the shul’s expansion project. Spending their summers in the Hamptons, they became active members and supporters of the Hampton Synagogue under the leadership of Rabbi Marc Schneier.

Arthur and Randi are supporters of Colel Chabad where Arthur is the chairman of the United Soup Kitchens of Israel.  They are sponsors of the Welcome Center opposite the Kotel in Jerusalem.

Randi and Arthur have been integrally involved in the North Shore Hebrew Academy (NSHA) where Arthur served as President.  They are among the founding families of the high school. Randi has worked on various projects for the NSHA PTA, and hosted their Welcome Night for new parents in the Luxenberg home.

In 2013, Randi began her involvement with Shaare Zedek Medical Center, at which time she was asked to chair the Women’s Health Day.  This June, will be Randi’s seventh year chairing the event which she almost single-handedly helped transform into one of the most dynamic, thought-provoking, sophisticated and well-attended events of the year. Health Day boasts top-notch speakers, exceptional boutique vendors and a sell-out crowd of women from throughout the NY Metropolitan Tri-State area. In 2015, Randi became an official member of the Women’s Division Board, a position to which she has brought much flare, creativity and passion.  Based on her work ethic, charismatic manner, incredible attention to detail, and passion for every project in which she becomes involved, Randi was recognized by Shaare Zedek Medical Center in Jerusalem, and received the most prestigious honor at the Shaare Zedek Dinner in 2017: the Heart of Jerusalem Award, as the main Dinner honoree.

Randi and Arthur are the proud parents of two beautiful daughters: Elizabeth, married to Steven Lipner, with a brand new grandson, Bradley Abraham; and Jacqueline, married to Jonathan Spiegel. Following in their parents’ footsteps, (also marrying guys from Woodmere like their Mom), Elizabeth and Jacqueline recently planned, organized and hosted a Sisters Seize Hunger event, selling baked goods to support the Daniella Moffson Foundation.  Elizabeth graduated from NYU Gallatin, and will begin Fordham Law School next fall.  Steven received his MBA from Wharton, and is currently working for Microsoft.  Jacqueline graduated from The New School, with a semester at the International Culinary Center where she studied professional pastry art, and is currently working at one of the top bakeries in NYC.  Jonathan is a Software Engineer at Moody’s Analytics.